Google’s Black Friday Deals are live!  There are some awesome deals to be had if you are in the market for a new shiny Google device and I have a bonus $100 Google Store Gift Card (US only – sorry friends overseas), with a purchase of a Pixel 6a, Pixel 7 or Pixel 7 Pro.  Meaning that in addition to getting the Pixel 6a for $299 ($150 off), you can get another $100 (emailed later from Google Store with code redemption) to be used on other Google gadgets such as a Google Pixel Buds Pro (sharing codes below)!

What’s on sale?  In addition to the latest smartphones, Google also has their other shiny gadgets on sale.  The sales aren’t restricted to the Google Store, so if you want your gadget quickly, try Best Buy, with instore pickups or Amazon (Affiliate Links below):

The code I have from Google are single use only, and once they are used, I will update this post with another code (takes 48 hours).  To redeem the code, just enter it in the promo code section at checkout.  If its invalid, it means that it has been redeemed.  The code is good until June 2023 (unless already redeemed). 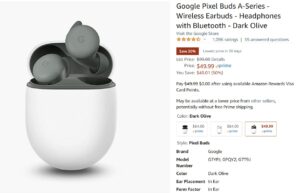 Which new Pixel gadget are you getting this Black Friday?  Let’s go #TeamPixel!